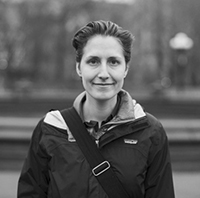 "The Network Map Under Water"

Bio: Nicole Starosielski’s research focuses on the global distribution of digital media, and the relationship between technology, society, and the aquatic environment. Her book, The Undersea Network, examines the cultural and environmental dimensions of transoceanic cable systems, beginning with the telegraph cables that formed the first global communications network and extending to the fiber-optic infrastructure that carries almost international Internet traffic. Starosielski has published essays on how Fiji’s video stores serve as a nexus of digital media access (Media Fields Journal), on Guam’s critical role in transpacific digital exchange (Amerasia), on the cultural imbrications of cable systems in Hawaii and California (Journal of Visual Culture), and photo essays on undersea cables (Octopus and Media-N). Before coming to NYU, she taught at Miami University of Ohio. She received her Ph.D. from UC-Santa Barbara.

Mapping Indigenous LA is a series of story maps that uncover the multiple layers of indigenous Los Angeles through digital storytelling and oral history with community leaders, youth and elders from indigenous communities throughout the city.  A map of Los Angeles does not tell the story of its people. In a megalopolis like Los Angeles, this is a story that is often invisible to policy makers and even the city’s notion of itself as a global crossroads. This story includes layered, sedimented cultural geographies of Indigenous Los Angeles that includes the Gabrielino/Tongva and Tataviam who struggle for recognition of their sacred spaces and recognition as a nations, American Indians who were removed from their lands and displaced through governmental policies of settler colonialism, and indigenous diasporas from Latin America and Oceania where people have been displaced by militarism, neoliberal economic policies, and overlapping colonial histories. When we consider Pacific Islander and Latin American Indigenous Diasporas, Los Angeles has the largest indigenous population of any city in the US.  While many would argue that there is not one Los Angeles but multiple LAs, what is less known is that there are multiple indigenous LAs whose histories are layered into the fabric of the city. Indigenous LA is about how the original peoples of the Los Angeles- basin (and islands) relate specifically to this land and how subsequent relocations and migrations of indigenous peoples have reworked space, place, and the meaning of these new racialities and concepts of indigeneity.

Bio: Professor Maylei Blackwell is an interdisciplinary scholar activist, oral historian, and author of ¡Chicana Power! Contested Histories of Feminism in the Chicano Movement, published with University of Texas Press. She is an Associate Professor in the César E. Chávez Department of Chicana/o Studies and Women’s Studies Department, and affiliated faculty in the American Indian Studies and Lesbian, Gay, Bisexual, and Transgender Studies. Her research has two distinct, but interrelated trajectories that broadly analyze how women’s social movements in the U.S. and Mexico are shaped by questions of difference ­ factors such as race, indigeneity, class, sexuality or citizenship status ­ and how these differences impact the possibilities and challenges of transnational organizing. Through collaborative and community-based research, Professor Blackwell has excavated genealogies of women of color feminism in the U.S. and accompanied indigenous women organizers in Mexico as well as feminist movements and sexual rights activists throughout Latin American. Her most recent research with farm worker women and indigenous migrants seeks to better understand new forms of grassroots transnationalism.

Bio: Roopika Risam joined the Salem State University faculty in 2013. She serves as Assistant Professor of English, Coordinator of the Secondary Education English Undergraduate Program, and Coordinator of the Digital Studies Graduate Certificate Program. She is finishing a monograph on the intersections of postcolonial studies and digital humanities, which is under contract with Northwestern University Press. Her other major project examines postcolonial and global themes in W.E.B. Du Bois’s writing. Additionally, she is the co-founder of Postcolonial Digital Humanities, a movement and emerging academic subfield within digital humanities that foregrounds global explorations of race, class, gender, sexuality, and disability within cultures of technology. She is a frequent speaker on issues of race, difference, and the digital; globalization and technology; pedagogy and technology; and social media and public scholarship.

Looking for collaborators, expertise, or other scholars with related interests?

Please see our list of affiliated scholars at KU.

Why KU
Apply »
Home to 50+ departments, centers, and programs, the School of the Arts, and the School of Public Affairs and Administration
KU offers courses in 40 languages
No. 1 ranking in city management and urban policy —U.S. News and World Report
One of 34 U.S. public institutions in the prestigious Association of American Universities
44 nationally ranked graduate programs.
—U.S. News & World Report
Top 50 nationwide for size of library collection.
—ALA
5th nationwide for service to veterans —"Best for Vets: Colleges," Military Times